You are here: Home

The Alzheimer's Society Dementia Together Magazine

Read The Alzheimer's Society magazine, produced six times a year for everyone in the dementia movement and anyone affected by the condition.

Welcome to Care and Cure, the research magazine from Alzheimer's Society. Explore our stories and read the most recent issue online.

February Newsletter (Opens in a pop up box).

Winter weather preparation for someone with dementia

With snow and icy winter weather on the way, it’s important that your loved one with dementia is kept safe and warm. Here’s where to start…

Cranking up the central heating and putting on an extra layer are all part and parcel of dealing with wintry weather. But for someone with dementia, these sort of actions don’t always come naturally. For example, they may struggle with their heating system or even forget how to operate it. Meanwhile, their dressing habits could also be affected – either by a loss of mobility or an inability to work out what clothing might be suitable.

Read more of this article on Unforgettable.org.

Making Space provides support, information and guidance for those living with memory loss, confusion or dementia, and for their carers. They get to know you as an individual and recommend the support specific to your needs. 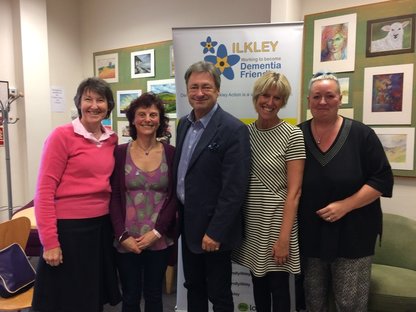 "ALAN Titchmarsh took time out after his appearance at the Ilkley Literature Festival to visit the Clarke Foley Centre, where he met members of Dementia Friendly Ilkley Action, DFIA, of which he is patron.

He was keen to find out more about dementia, how it affects people and those who care for them and especially the work of the group in Ilkley. He was interested to hear how businesses and organisations can become dementia friendly and pleased to hear that numbers are growing of those in Ilkley who have written action plans and are recognised as becoming dementia friendly, allowing them to display the forget-me-knot logo of Alzheimer's and dementia friends. He agreed it was important to educate people to help remove the stigma and fear around dementia, and was keen to hear about the work the group hope to do in the coming year with Ilkley Grammar School and local primary schools.

He offered his continued support to the work of DFIA and asked to be kept up to date of their activities in Ilkley, he looked forward to catching up next time he was in the area and expressed an interest in attending a Dementia Friends session to understand more about dementia and what can be done to support people living with dementia when his busy schedule would allow.